A state-of-the-art digital court room has officially opened at HMP Peterborough, managed by Sodexo Justice Services, reducing the need to transport individuals from the prison for court appearances. 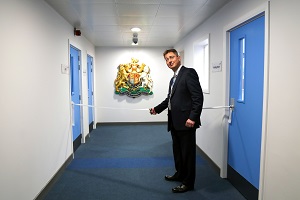 The new video conference centre (VCC), completed in partnership with Her Majesty’s Prison and Probation Service (HMPPS), faithfully recreates the appearance of a court within the prison to encourage the behaviour expected when appearing in front of a judge.

The new facilities are an improvement on the previous technology used, with upgraded audio capabilities and the ability to link to multiple courts at one time.

HHJ David Farrell QC, Resident Judge of Cambridgeshire, HMPPS, said, “Reducing the number of people transported to court each day has both environmental and security benefits, cutting down on lengthy journeys and the negative impacts of confinement in a vehicle for many hours.

“It should also provide some victims of crime with peace of mind, knowing that they won’t need to see the perpetrator of the crime committed against them face to face.”

Damian Evans, Director of HMP Peterborough said: “We are very proud of our local team who worked extremely hard to ensure this project was completed to such a high standard, on time and within budget.

“The nature of our male prison population is changing, with increased emphasis on remand and resettlement, and our use of such facilities will grow as we serve courts in the Northamptonshire area, in addition to Cambridgeshire. The new centre will enable us to provide a much higher quality service to the courts, while reducing the need for transport.”

HMP Peterborough is the first private prison to complete the new VCC, both on time and within the planned budget.